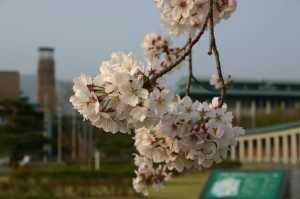 Title: Excitation of quantum particles in one dimension through adiabatic cycles

I will explain that adiabatic cycles may excite a particle, which is confined in a one-dimensional region and is initially in a stationary state. During the adiabatic cycle, a $\delta$-wall is applied and its strength and position are varied. It is also shown that the result of the adiabatic cycle is programmable. A detailed argument is provided for the case that the particle is confined by an infinite square well. I will also explain an extension of this result to a many-body setting.

Title: Energy spectrum of the Non-linear Schrödinger equation on a ring with a defect computed automatically

Date & Time:  March 15 (thu), 2018m 15:30-17:00 @
Place: room B504, Kami Campus, KUT
Abstract:
First I will show the reproduction of the first four energy levels (corresponding to stationary waves with real amplitude) of the non-linear 1D Schrödinger equation as computed by Nakamura and Cheon in Figs. 2-4 of [JPSJ 86 114001].  In my case, no gaps are found and all the energies are computed automatically.  This energy spectrum will then be extended to the whole parameter space bounded by  -5<g<5, -inf<t<inf, -1<v<1, where g is the non-linear parameter and t and v define the boundary conditions or defect. In order to automatize this computation, the eigenfunction, energy E, and integration parameters c, and x0  must be continuous in the parameter space (g,t,v). I will show how this is true if one uses a proper definition of the functions. At the end, I will comment a bit on scalability and complex eigenfunctions.
Third Talk
Speaker: Dr. Taksu Cheon (Kochi Tech)

We introduce a model of temporal evolution of political opinions which amounts to a dynamical extension of Galam model in which the number of inflexibles are treated as dynamical variables. We find that the critical value of inflexibles in the original Galam model now turns into a fixed point of the system whose stability controls the phase trajectory of the political opinions. The appearance of two phases is found, in which majority-preserving and regime-changing limit cycles are respectively dominant, and the phase transition between them is observed.